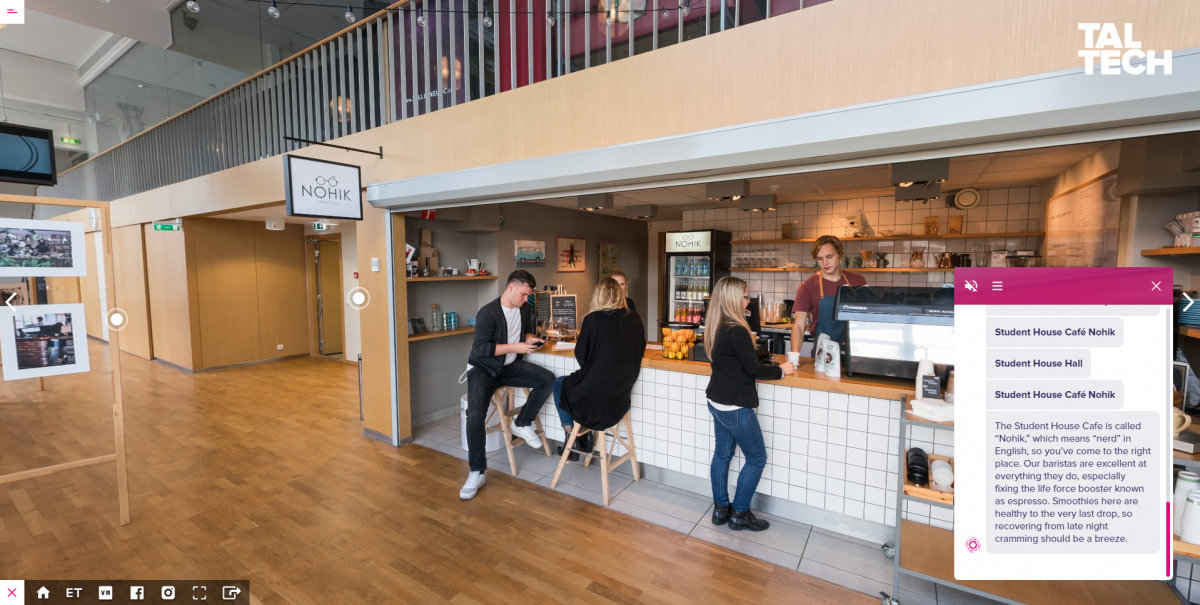 As suitable for a digital university, the virtual tour at the TalTech campus is conducted by a virtual guide, who directs the visitor with questions and encourages to click on more interesting sites.
Such a tour is unique not only in Estonia, but also worldwide.

TalTech's Vice-Rector for Academic Affairs Hendrik Voll said that 360-degree videos, sound and design have been integrated into the virtual tour so that the tour captivates the user right from the first scene. "The virtual tour provides student candidates and others interested with an opportunity to get a better sense of and a real insight into the opportunities offered at TalTech – the exceptional campus, modern learning environment, buildings, laboratories and infrastructure, the vibrant and diverse student life and the innovative projects undertaken at the university," Voll said.

As a rule, virtual tours are simply 360-degree photos that allow viewers to look around in a room or at a site. TalTech's virtual tour is distinguished from other tours by its virtual guide who introduces the university in a humorous way. The developer of the tour Lauri Veerde (TUUR) explained that the novelty of the virtual tour lies in the fact that all the components are integrated into one whole to provide a uniform experience and introduce the university in a completely different way than it has traditionally been done. "I dare say that such a virtual tour with a virtual guide is unique in the world. TalTech's own students have lent their voice to the guide in Estonian and English," Veerde says.

Veerde added that they intend to upgrade the virtual tour. "In future we will certainly add more exciting sites from different Schools - there is no shortage of such places at TalTech! The virtual guide will develop and grow together with the virtual tour. One day you will probably see the guide in the form of real artificial intelligence who introduces university life to interested candidates and helps them orient in the physical space and study arrangements," he explained.

TalTech's virtual tour is for PC-s and mobile devices. You can find the most innovative virtual tour in Estonia here: virtualtour.taltech.ee.

The virtual tour was developed under the leadership of TalTech International Recruitment and Admissions Division. ​The project was funded through Archimedes Foundation's Dora Plus action "Marketing of study and employment opportunities in Estonia" financed by the European Regional Development Fund.