Report: Estonia has the second-freest internet in the world

According to the Freedom on the Net 2022 report, compiled by Freedom House, Estonia has the second-freest internet in the world after Iceland.

“Protections for user rights are strong and the Estonian government places few limits on online content; however, a number of Russian websites were blocked during the coverage period. Cyberattacks that targeted governmental websites had limited impact, in part due to countermeasures taken by Estonian cybersecurity officials.”

“Democratic institutions are strong, and political and civil rights are widely respected in Estonia. Right-wing and Eurosceptic populist forces have become increasingly vocal.”

According to the report, there are very few blocked websites in Estonia, and the vast majority of political, social and cultural content is freely available to users.

“However, during the coverage period, the regulator blocked a number of websites in response to Russia’s brutal invasion of Ukraine.” 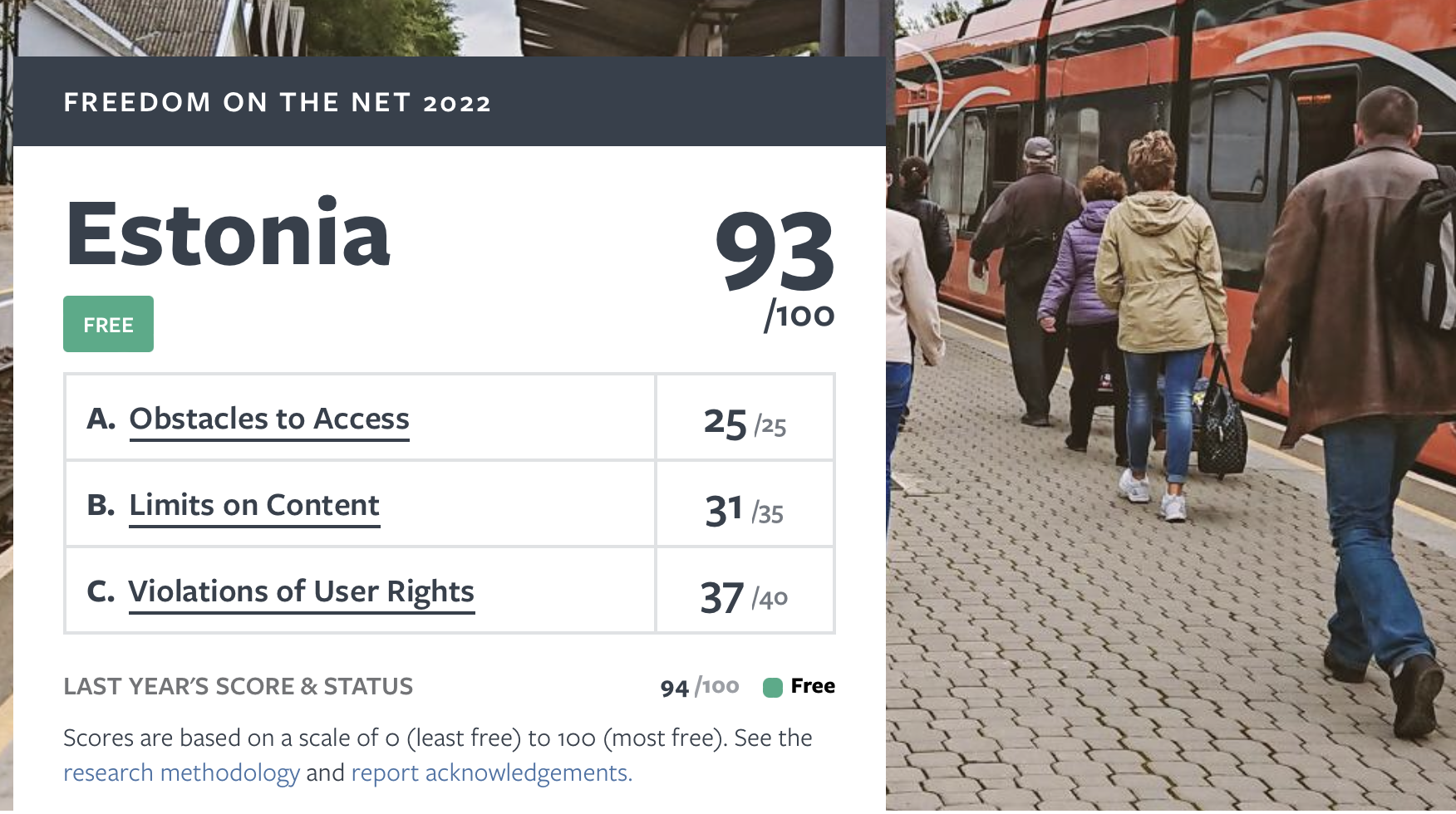 In March 2022, the authority ordered the blocking of another TV channel RBK (RBC TV), seven websites (ntv.ru, ren.tv, 5-tv.ru, 78.ru, 1tv.com, lenta.ru, and tass.ru.) and 12 internet channels, whose “content incites to commit offenses towards national security and national defense, to the detriment of the security of society,” according to the Consumer Protection and Technical Regulatory Authority, the report points out.

The blocking of the Russian state-linked websites resulted in a score change in the limits of content category of the report – when in 2021, Estonia scored five out of six, then in 2022, Estonia scores four out of six.

“The primary restriction on internet content remains a ban of online illegal gambling websites. As of January 2021, the Tax and Customs Board had more than 1,600 URLs on its list of illegal online gambling sites that Estonian ISPs are required to block.”

The global internet freedom is declining

“Estonia, known the world over as one of the most advanced digital societies, enjoys good connectivity and high rates of access, few state-imposed restrictions on online content and robust safeguards for human rights online,” Hille Hinsberg, an Estonian digital governance expert, who served as one of the national rapporteurs for this report, said in a statement.

Globally, internet freedom has been declining for the past 12 years. The study finds that more than three-quarters of the world’s internet users now live in countries where authorities punish people for exercising their right to free expression online. The use of tracking tools and manipulation of the general public with disinformation is on the rise.

According to Hinsberg, internet freedom is currently not under threat in Estonia, but nevertheless, we must keep a keen eye on relevant developments.

“Each individual can do their part to maintain the trustworthiness of online content. Especially during times of crises, we should be extra careful when distributing information,” she said.

Estonia fares better than the UK and the US

The freest internet in the world is in Iceland. Costa Rica came third, Canada fourth and Taiwan fifth. The United Kingdom is ranked sixth and the United States eleventh.

Latvia, Lithuania, Finland and Sweden are not included in the index.

The Freedom on the Net 2022 report by Freedom House covers the period from June 2021 to May 2022. It’s a comprehensive study of internet freedom in 70 countries around the globe. It tracks improvements and declines in internet freedom conditions each year. The countries included in the study have been selected to represent diverse geographical regions and regime types.

Freedom House is a non-profit non-governmental organisation that conducts research and advocacy on democracy, political freedom and human rights.