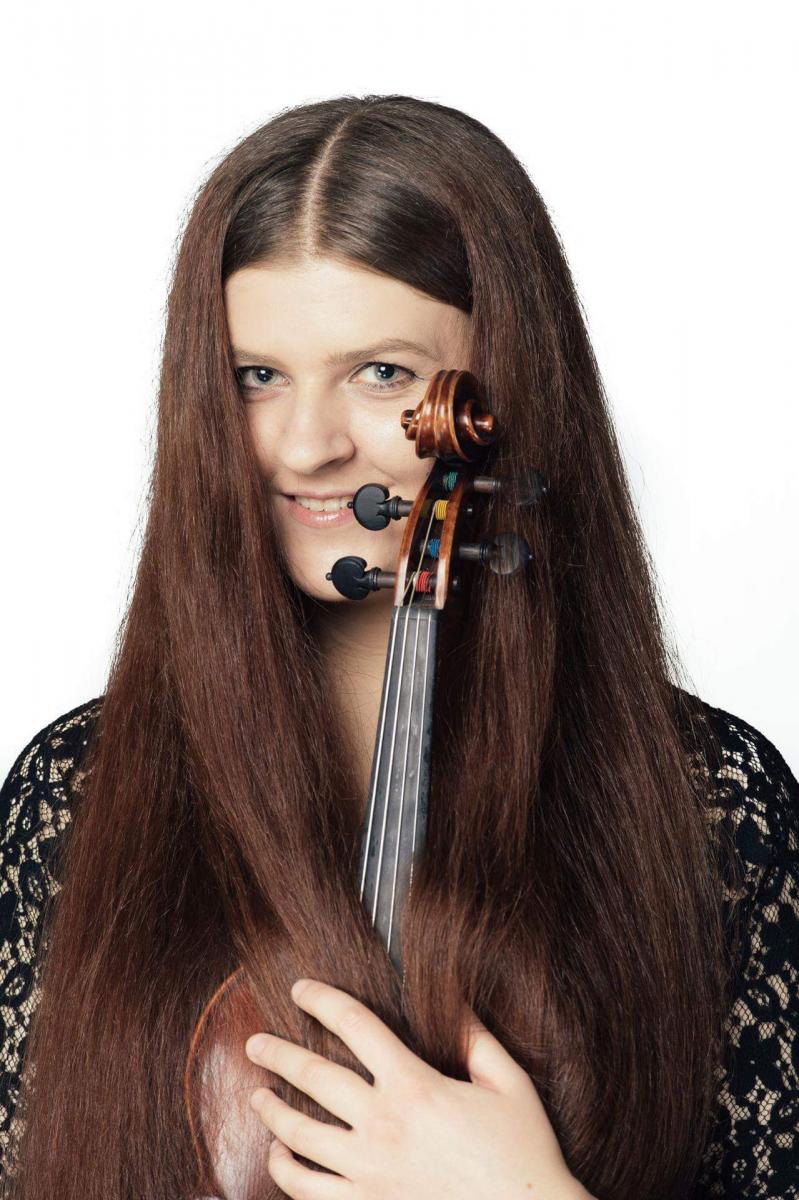 Sandra’s Estonian journey has a long history. “I found out about Estonia as a study destination quite accidentally”, Sandra begins her story in our online video conversation over a cup of coffee. Another musician from Lithuania, a friend of hers, came to Estonia for Erasmus exchange and soon became a student of Estonian Academy of Music and Theatre (EAMT). At the time, the university was in search of viola players, and Tallinn seemed to be an attractive place to explore. Sandra didn’t hesitate to act upon the opportunity: after three sleepless nights of traveling from Vilnius to Tallinn and passing the entrance exam for a bachelor’s degree, she found her way into the academy. “It was probably the best decision I have ever made”, Sandra admitted. “Since my English wasn’t good at the time and I couldn’t speak Estonian or Russian very well either, and everybody asked me at the exams: ‘Why do you want to study here?’, I simply replied: ‘I want to be a good musician’. I never thought otherwise”. It has been eight years since then.

There hasn't been much of a culture shock. Despite the cultural differences and mutual jokes about one another, the three Baltic sisters — Lithuania, Latvia, and Estonia — have long been united in their page-turning history and desire for freedom. “Although I have never met anybody from Estonia, I knew that Estonians lean towards the Scandinavian way of thinking”, Sandra remarks on her first days in Tallinn. “Despite the linguistic and cultural differences, however, I never experienced any difficulties in getting accepted by both Estonians and foreigners living here”. It has been easy, especially considering Sandra’s professional field: artistic personalities tend to be open, curious, and communicative regardless of their cultural background. “I have heard that some of the foreigners coming to Estonia from more distant countries feel a little bit of a culture shock, but it has never been an issue for me”. 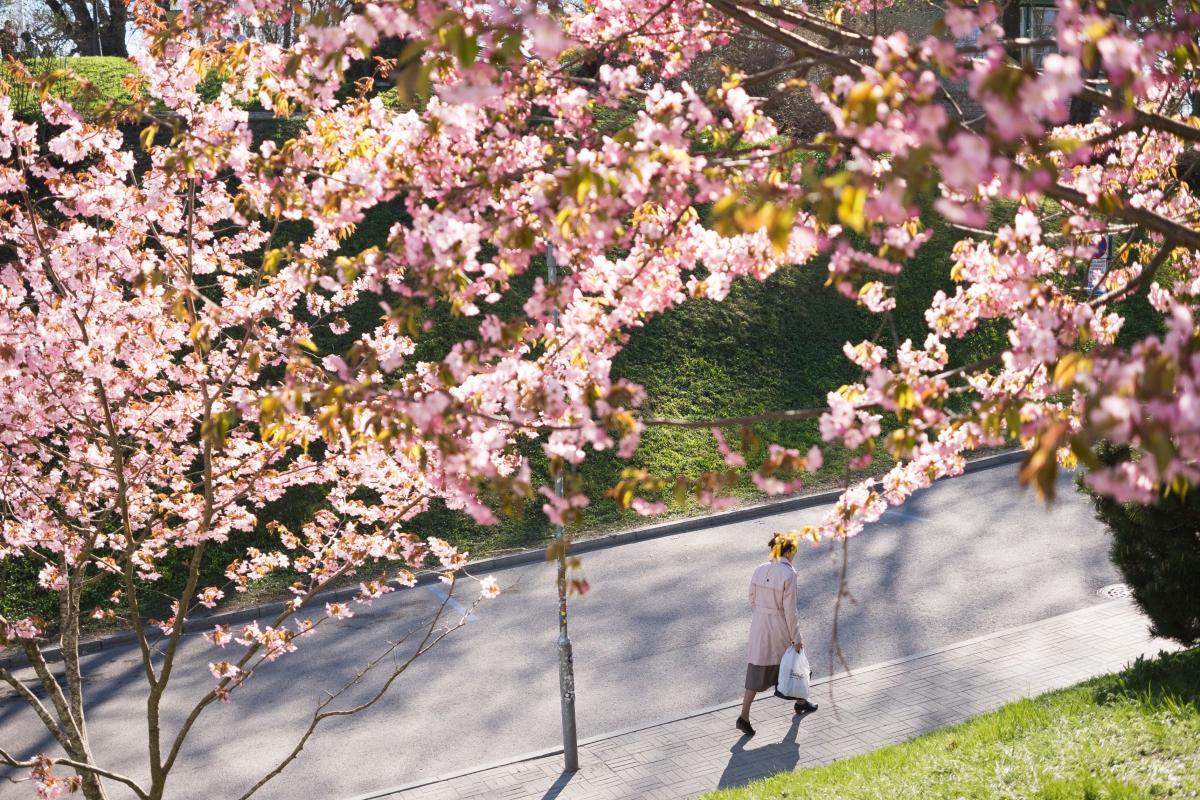 Sandra was lucky to find her music passion at a young age. When she was only seven years old, she dreamed of becoming a choir conductor. One day, a music teacher was visiting Sandra's school and asked her what she wanted to study. When her mother mentioned conducting and singing, the teacher looked at Sandra’s hands and briefly said: “Let her play violin”. For nine years since then, Sandra played violin at National Mikalojus Konstantinas Čiurlionis School of Arts in Vilnius, but the sound of the viola had always been closer to her heart. At the age of 16, she started playing viola in Tomas Savickas's class. “I have always loved it; it’s a beautiful sounding instrument”, Sandra adds with a dreamy smile.

In 2012 Sandra started her bachelor studies at Estonian Academy of Music and Theatre in Tallinn with professor Mari Tampere-Bezrodny, Estonia’s renowned violinist and violin pedagogue. “Perhaps it’s strange that I studied viola with a violinist, but both instruments share many technical similarities”, she explains to our wonder. Indeed, violins and violas are magnificent string instruments, the sound of which most people can easily recognize from a close distance. However, when placed in an orchestra setting, no one, except for educated musicians, can discern the difference. 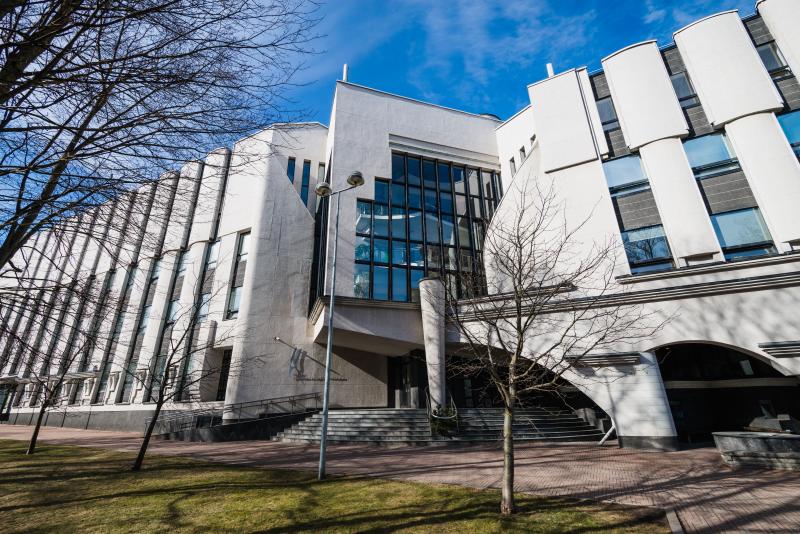 In Estonia, Sandra has found the academic freedom she has long been searching for. Based on her experience, the system of higher education in Lithuania and Latvia share certain similarities with Eastern European teaching methods, which often may be counter-productive towards motivation and creativity. “I have found freedom, which is very important for me as an artist; I have never lost my enthusiasm and always strove to do better”, she remarks to our question about her music education at the academy. If you cannot find the right teacher who can support and motivate you every step of the way, it is very easy to stop what you are doing and give up on music. “I know many people from other countries who gave up, thinking music was not for them. More likely, their teachers made them do that”, she adds. “I was extremely lucky, I had an incredible teacher. I am thankful to Mari for everything she has done for me”. In 2019, Sandra graduated cum laude after more than five years of her studies at EAMT.

Today, Sandra works at the Estonian National Symphony Orchestra (Eesti Riiklik Sümfooniaorkester or ERSO), established in 1926 and considered a prominent ambassador of Estonian symphonic music abroad. Every year during Sandra’s studies at EAMT, the National Symphony Orchestra held substitute musician auditions. For the academy students, it was an opportunity to work in the orchestra in case some of the musicians were absent and earn some extra money. Sandra found her way into the orchestra in the last year of her bachelor’s degree. “It’s a big orchestra, at least by the Estonian standards, but we were getting to know each other, and it was becoming easier to get a job”. In 2016, she got a full-time position at the viola section of the orchestra. 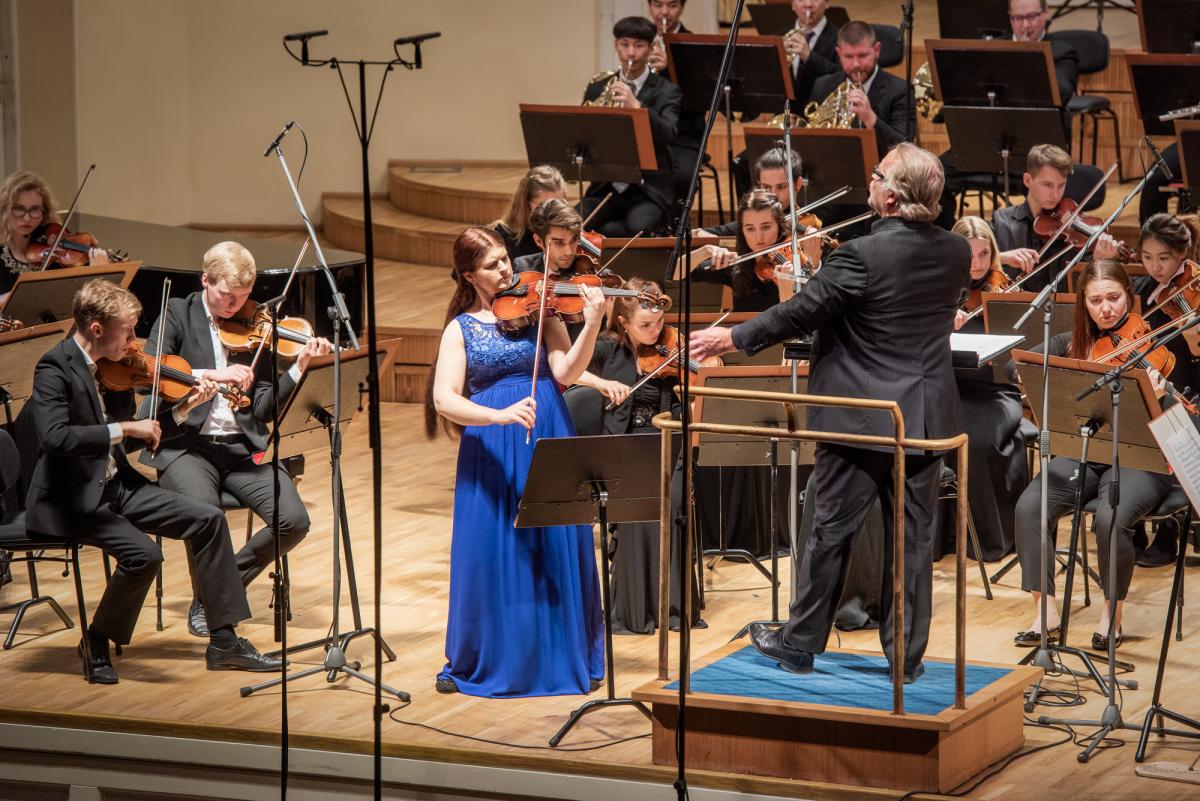 Finding a music job in such a small country as Estonia seemed a difficult task, especially for a foreigner. Many professional musicians find only part-time or intermittent work and may have long periods of unemployment between jobs. In addition, Estonian orchestras seem to prefer hiring Estonians, because foreigners are considered more likely to seek professional opportunities abroad or simply return home. “I know many people who came to study in Estonia and went back to their home countries after graduation”, Sandra explains to us. “I was lucky to find my way into the orchestra since there are not so many foreigners. It’s a long way for us: in such a large and competitive community, you have to be ready to dig your way through; it’s not enough to try your luck once”. Finally, basic knowledge of Estonian, English, and Russian would be of great benefit to anybody looking for a permanent music job in an Estonian orchestra. According to Sandra, conductors tend to change every week, and they might be from different countries. Naturally, some of them speak entirely in Estonian, others might speak Russian or a little bit of English. “Although my Russian isn’t very good, I understand it, and that’s what matters in an orchestra work”, Sandra points out. “It’s equally enough to know the basics of Estonian. At the end of the day, music is our main language”.

Unfortunately, since the announcement of the COVID-19 emergency situation in Estonia, the work of the orchestra stopped for several weeks. “There’s no online transition in an orchestra work; it’s not something you could do from home”, Sandra admits. “It takes the synergy of a single group, and nothing brings more pleasure than playing together. Of course, it is also very important to stay in shape as a musician”. As the situation has improved, different orchestra sections — the string or wind instruments, for example — started playing in chamber groups. It remains to be seen if the music events scheduled in Estonia this fall will take place as planned. 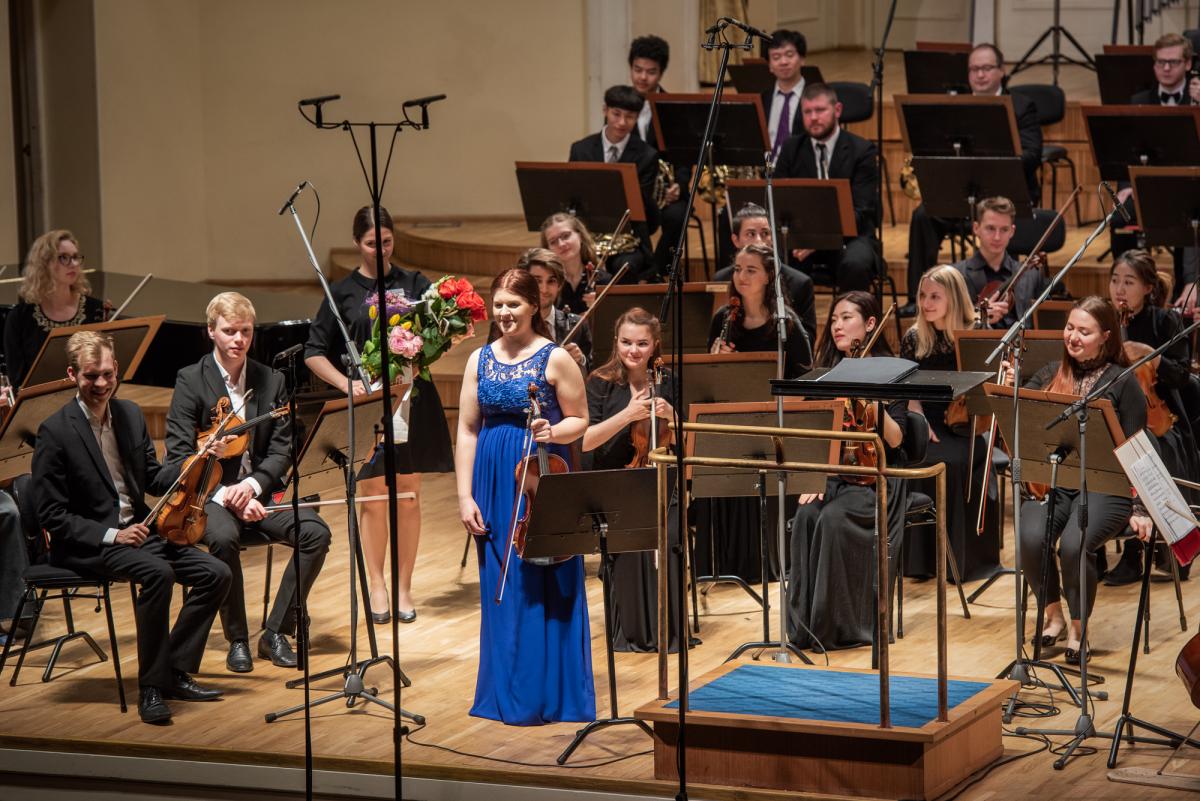 Sandra talks about her profession with passion. When asked about her biggest professional motivation, she beautifully responds: “It is the feeling during the performance, which I enjoy the most. It is difficult to explain, but you suddenly find yourself in a totally different world, made of feelings, sounds, and colors. It’s the best sensation ever, whether you play in an orchestra, chamber group, or solo. That’s why we practice for such a long time. It’s a long way to go, but it’s definitely worth it. However, it’s a two-way process: as musicians, we want to give the most to the audience, not only take the pleasure of playing on stage. First and foremost, we do it for the people”.

Studying in Estonia: What to Know

Sandra doesn’t plan to leave Estonia in the foreseeable future. At the same time, she acknowledges: you never know what life may bring to you. We asked for Sandra’s personal tips for anyone considering coming to Estonia for their higher education in music. “As soon as you arrive in Estonia, find the best music teacher for yourself”, she suggests. “In the field of professional music, it’s not so much about the place of studies, but the person who teaches you”.

"In our small professional world, it’s easy to make the right connections, and there’s surely somebody who studied somewhere. Visit Estonia, if possible; receive some consultations from the teachers; decide if they can meet your needs. If you need a contact, get in touch with the Student Council of the EAMT; alternatively, there are Facebook groups for local musicians and EAMT graduates. Just don’t be afraid to ask. I have many friends who came to Estonia for their Erasmus exchange, and all of them absolutely loved it. Myself, I cannot imagine my life anywhere else at the moment. Estonia has become my home”.