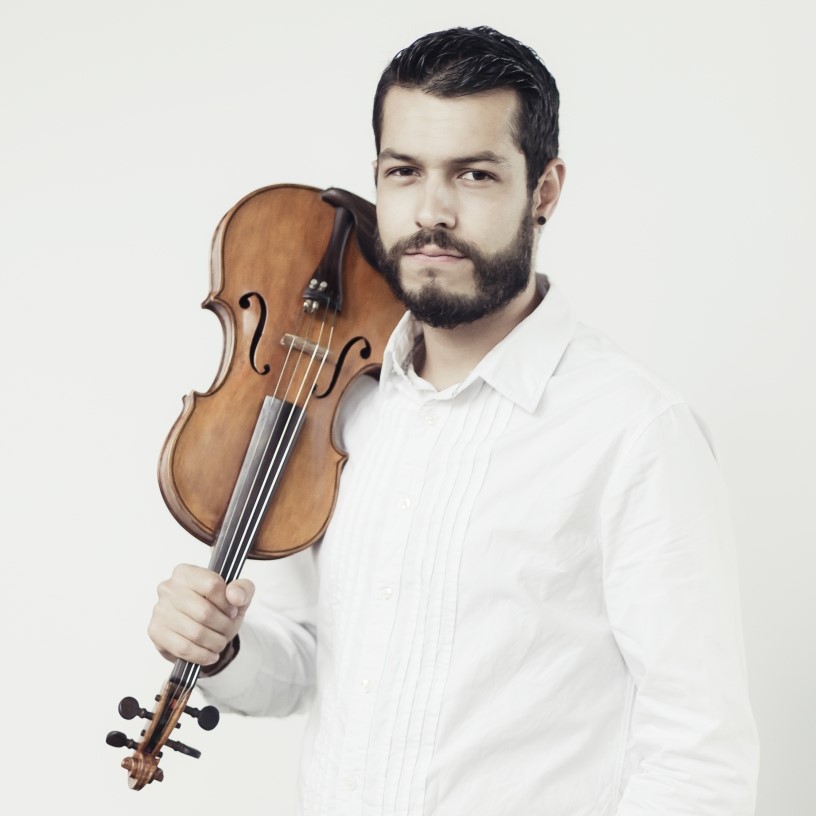 Juan José Restrepo Duarte, originally from Colombia, came to Estonia to study a Master's degree in Music at the Estonian Academy of Music and Theatre six years ago. Today, he works at the Vanemuine theatre in Tartu, teaches violin in Võru music school, and pursues another Master's degree in Conducting in Tallinn. What's it like, coming to study music in Estonia, the singing nation of Europe? This article is part of the Alumni Success Stories series, created in collaboration with the Estonian tech news platform Geenius.ee. ​

一 When did you decide to come to Estonia?

一 While studying a Bachelor’s degree in Music in Colombia, I was looking for a place to study a Master’s degree in Europe. Thanks to networking, I had a chance to contact Mari Tampere, who teaches violin at the Estonian Academy of Music and Theatre, a very avant-garde place. There was also a possibility to apply for a scholarship, which could help me with the living costs. Although in the end, I have paid for my studies, it was worth coming here. It was in 2013, I arrived to Tallinn straight from Bogota. According to the plan, I would stay for only two years. I didn’t know, however, that every foreign graduate in Estonia has an opportunity to stay and find a job: it is a fast-growing country that always needs professionals. That’s how I started my career as a violin player at the Vanemuine theatre.

一 What did you know about Estonia before?

一 I knew one interesting thing about Estonia thanks to the world of music: Olav Roots, an Estonian-born composer and conductor who, in the 1950s, fled to Colombia from Sweden. He lived the last few years of his life in Colombia, conducting the National Symphony Orchestra, and became a very important figure in the evolution of the local classical music culture. We knew about Estonia because of him.

一 What have been your impressions of the student life in Estonia?

一 Studying music can sometimes be compared to the professional sports: you dedicate hours and hours to practicing the instrument. I’ve studied violin, so my whole life was at the Academy, starting at an early hour every day to practice the instrument and attend the lectures. Other than that, studying in Estonia compared to Colombia was like a whole new world. First, it is the system of education that works more effectively than in Latin countries: students are free to choose their own development path, they have access to financial support. Colombia's public education system is already collapsing because too many people are seeking higher education. Alternatively, you could go to a private university. Although more expensive, it can be viewed as an investment into your future. Unlike in Colombia, a country of 44 million people, it is easier to manage and keep things under control in such a small country as Estonia.

一 Many people say Estonians are closed and not very chatty, while in Latin America, from my experience, people seem to be happier and more open. Would you say that’s true?

一 There are many factors that influence social interactions between people. South America is a huge land; there are no seasons, only one type of a nice weather. Colombia is part of a Hispanic cultural community, more temperamental and emotional. Yet I wouldn’t say Estonians are closed, it depends on the personality. I have met many Estonians who were open from the start, especially in the music world where we all know each other. Some locals may be reserved until they begin to trust you, when they get to know you. Estonia is a unique culture with a unique language, which itself makes it unlike any other place in the world.

一 Do you have a favorite place in Estonia where you like to go?

一 I am always on the move: I live in Tartu, teach violin to children and teenagers in Võru music school, and study a Master’s degree in Orchestra Conducting in Tallinn, which I am very lucky to be part of. Since I study in Estonian, I already feel like an Estonian student and I am very grateful for that. Speaking of my favorite places, I like Tartu and Võru, more to the South of Estonia, for their calm and quiet atmosphere.

一 Did you speak any Estonian before you came?

一 No, I've only done some basic research on how to say tere hommikust, tere päevast, and so on. However, I could never imagine I would study in a language like Estonian, such a unique yet difficult one with a complex grammar. It’s still tough, but I try to speak and be understood. I guess it’s a lifelong process to master a foreign language. It’s true when they say you don’t need words if you have music: it’s all about your instrument and your voice. Once I started working in Tartu, of course, I began to really learn and speak Estonian to survive.

一 Do you miss anything from Colombia?

一 The nature is something that I miss from home, because Colombia has everything: the mountains, the seaside… I can always go back there, but my heart belongs to Estonia that taught me to adapt. My first winter in Estonia, the darkness, for example, were shocking to me, but I learned how to adapt. It’s also learning the ways to express yourself and communicate with the local people without being intimidated by their seriousness, not simply learning the language as such. It’s already been six years since I am here.

一 What would you say or recommend to anyone who’d like to study in Estonia?

一 It’s an amazing idea, whether you are into music and arts or something else. Baltic Media School would be an interesting choice; IT careers tend to be quite successful here. Have you seen the new building of the Music and Theatre Academy? Now there’s even more space for anyone who’d like to start their studies in there. So, if you are planning to study music, Estonia would be the right place. It has always been called a singing nation for a reason.

一 You’ve mentioned a degree in conducting. Are you planning to work in this field?

一 It’d be great, another possibility to develop my career of a musician. At the moment, I am doing an orchestral interpretation of violin, as well as teaching everything I’ve ever learned in my life, sharing my knowledge with the others. Orchestra is a completely new level where you have to be able to control a massive group of musicians in front of you. There’s a lot of responsibility and complexity involved in doing that job. Yet I’d love to do it, when it’s the right time.