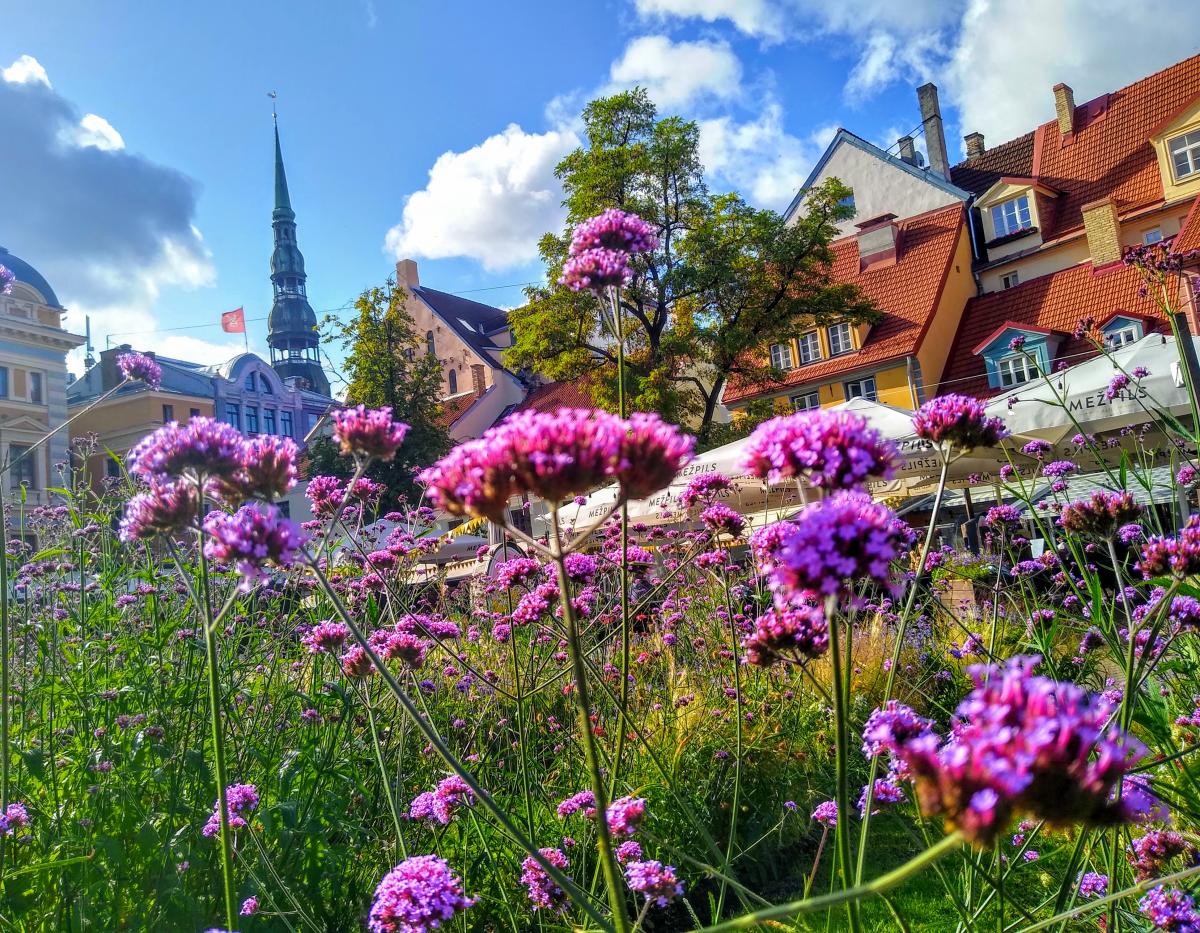 Coming to Estonia, the words “Baltic states” hit against my ears every so often. I would be attending school in one of three Baltic States. The other two being Lithuania and Latvia. So, of course, the minute I had a free weekend to travel, I planned my trip. A “quick” 4-hour drive and I was in Riga. As we drove into the city, a view of the Vanšu Bridge greeted us. It was 9 am and I had the whole day to walk and experience all that Riga had to offer. My original plan was to just wander about, but then I realized that I’d probably get lost anyway. After being throw off by an 18 euro boat tour on the canal, I found free walking tours.

Currently, you can choose between two types of tours: Old Riga and The Alternative Riga Tour. Old Riga tour will take you to all the historical sights, while the guides (usually young students) actually make you interested in all the random facts and dates. On the way, we saw Town Hall Square, the cathedral and even the Three Brothers. The Three Brothers are a complex of three residential houses, each built in different styles depending on the time they were built, ranging from the 15th to the 17th century. The buildings have been named based upon similar buildings found in Tallinn; the Three Sisters. The wonderful tour guide also led us to Baker Street 221B. And now I know you might be thinking - what is Sherlock’s street doing in Riga. Well as a big fan of all that is Sherlock Holmes, I was very confused. There is a “Sherlock” hotel on Mazā Monētu Street 3, and it was built in 1898- the same year that Arthur Conan Doyle’s first story of "Stories about Sherlock Holmes" was released. The reason this area is a fan of Sherlock is that during Soviet times there was a Holmes and Watson detective series filmed on these very streets of Old Riga. The show was even praised by the Queen of England herself.  I’ve read that in front of the hotel they are planning to place a statue of the wonderful detective-so I’m definitely returning to Riga. 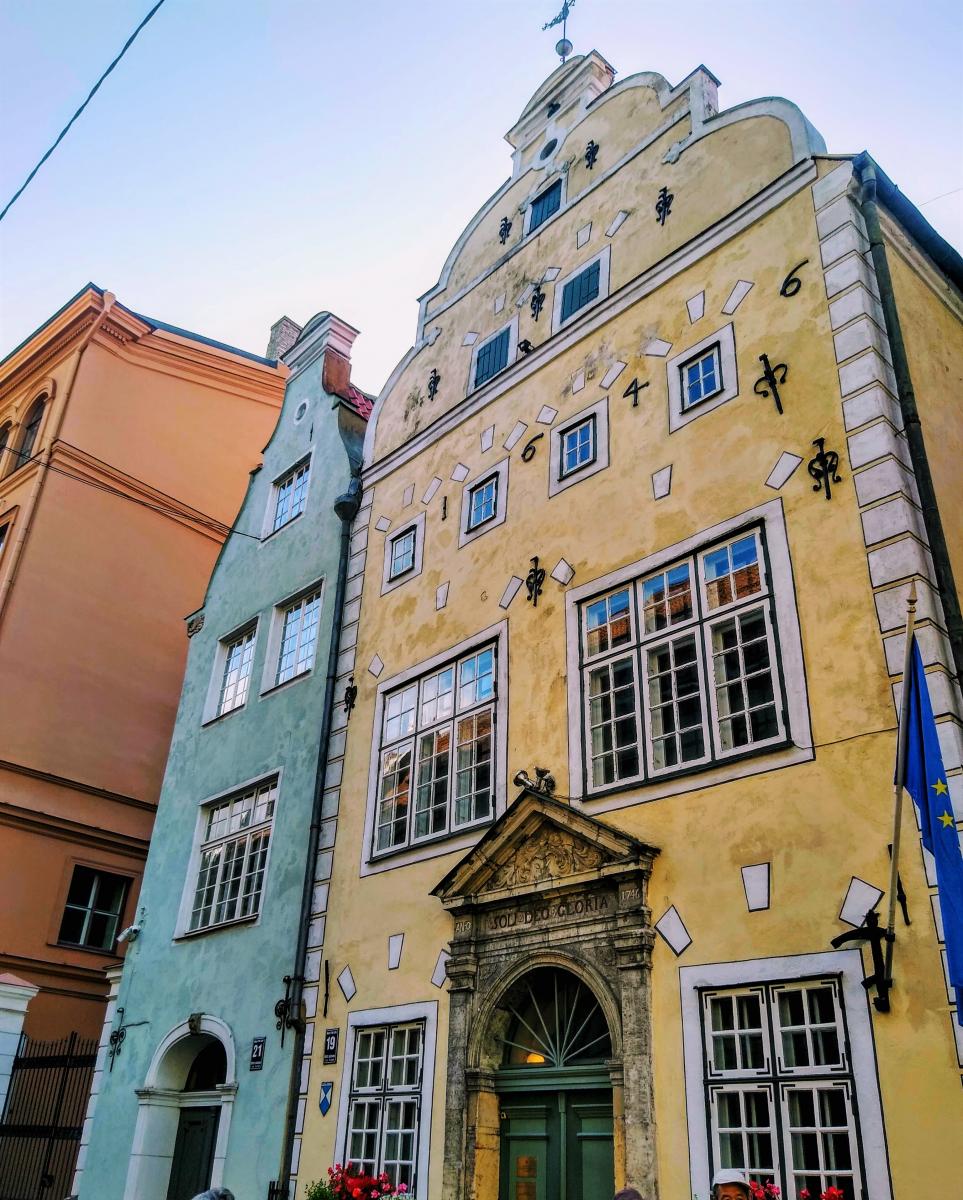 The Alternative Tour takes you to the lesser-known areas, the roads less traveled by. I got to see the Riga Central Market, which was built from the remaining materials of old German Zeppelin hangars. Though you won’t see any zeppelins there now you can find all the food your heart desires. From bread and pastries to fresh meat. The tour took me to the Moscow District, where I got to see the Academy of Sciences. A “sister” to my home cities’ Palace of Culture and Science (in Warsaw).  So, before you go to Riga search up “free walking tours in Riga” and sign up; you can also go without signing up but it’s easier for the guides if they know how many of them are needed.

I’ve noticed that many countries have their signature alcohol, for the polish it’s vodka and for Latvia-Black Balsam. Riga’s Black Balsam was recommended by the tour guide, a must-try. Now the unconvincing part: it doesn’t taste all that well, apparently it burns your throat and resembles the taste of cough syrup. Yet many people put it on ice cream or in coffee and tea to provide just a bit of a kick. In the store, you can find three different types: original, black currant and cherry. It is presented as being made from 24 all-natural ingredients. I bought the black-currant in order to try it out — it still sits on my shelf waiting for the right moment to try traditional Latvian herbal liqueur. 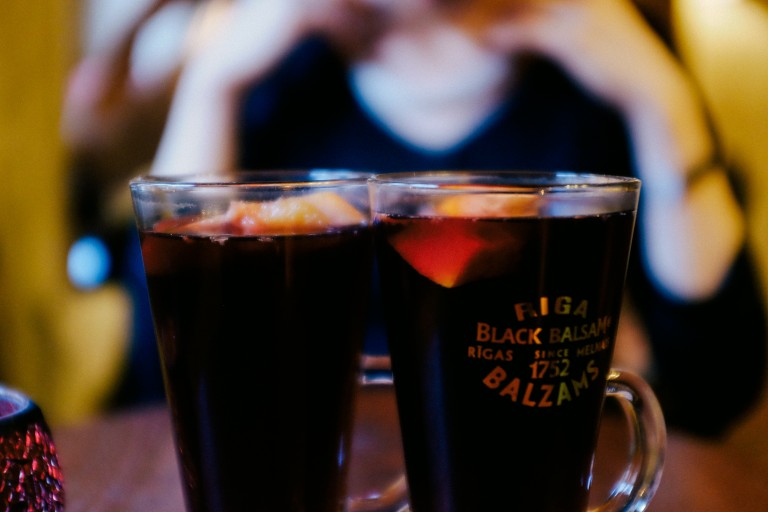 Two weeks later I started my next journey. This time I was a bit luckier, as I had a friend who could act as a tour guide. She lived a bit outside of Vilnius, in the countryside with the prettiest view of a lake I’ve ever seen. After getting over the picturesque views surrounding her house-I got ready to go see the capital. Driving into Vilnius was almost like driving into New York City, to get to the center you went through a tunnel-like structure and passed high buildings. To enter the old town we went through the Gates of Dawn. It the only gate, of five that were part of the original city wall built in the 16th century, that still stands today. From the outside, it looks quite bland, but once you go through you’ll see a beautiful white gate adorned with gold accents. If you continue walking straight you’ll eventually stumble upon Town Hall. A modest square, where a small Christmas market is held in the winter. A larger one is held in the more “popular” square - the Cathedral Square, which is home to the Cathedral Basilica and Bell Tower.  In Town Hall square you’ll be able to find a tourist information center with maps and free tours. 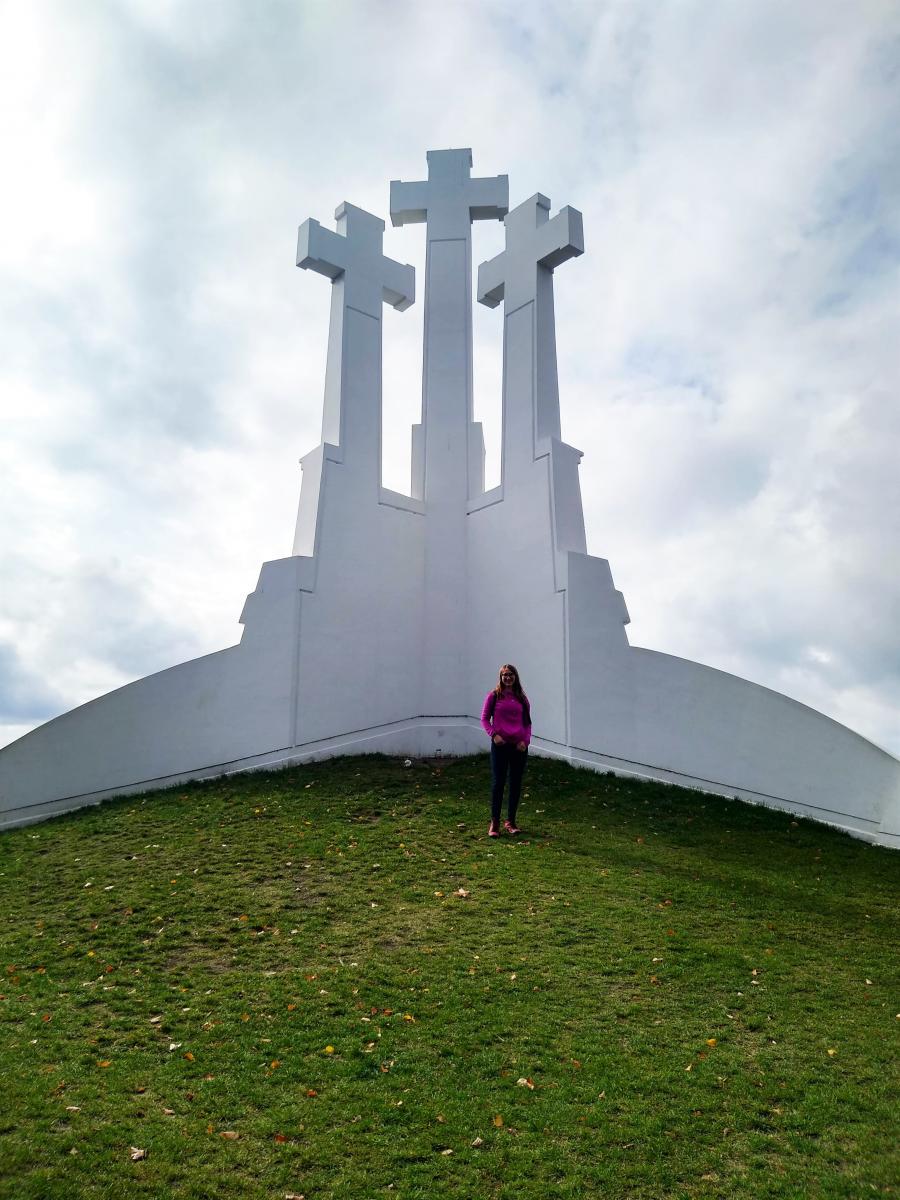 One of my major points of interest was the Hill of Three Crosses. From the bottom of the Hill you get to see these large, wonderful white crosses looking over the city. Luckily, the climb up is free, unlike the viewing point of the Bell Tower, and you get a much prettier view. To reach the top you have to walk across the Vilnia river and through Kalny Park, both scenic areas, especially in autumn. The climb is quite intense if you hadn't had a workout in a long time, but it’s well worth it. I was surprised though, the crosses weren’t as tall as I expected them to be, and their power seemed to have lessened as I stood near. 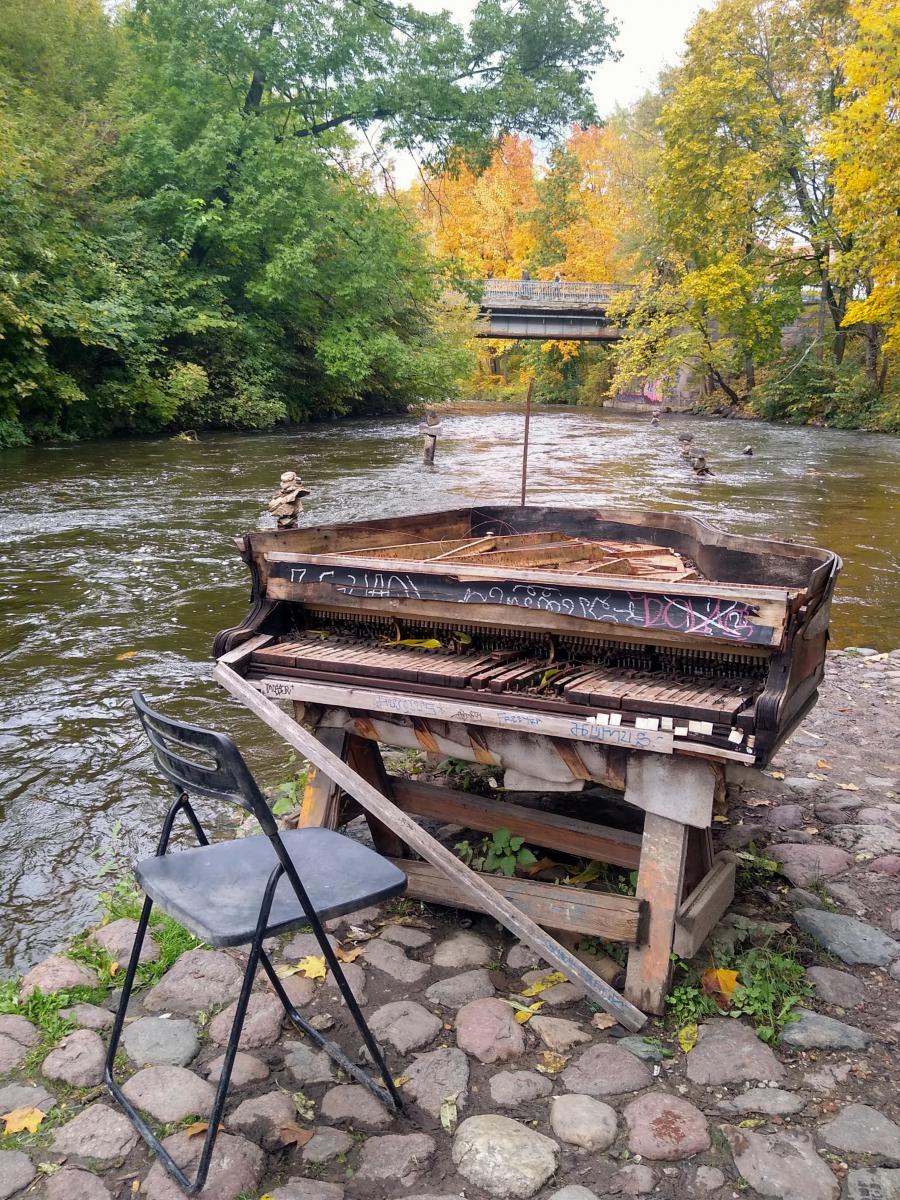 Still, my favorite place in the whole city had to be the art district “Republic of Uzupis”. It’s a small district on the outskirts of town across the Vilnia river. Turns out Vilnius is more than just old buildings and hills. Right as you cross the bridge covered in locks symbolizing eternal love, you can see that this area is different. Bright colors and artsy sculptures. Old broken pianos stand as a statement on the street, one is even in the river! It’s a perfect place to take those creative Instagram pictures! The best part was a large rocking zebra (like a rocking horse for kids, but big and a zebra) that I just had to take a picture on. A swing decorated with the words “Let it Be” can be found hanging from one of the bridges leading to the republic. Apparently, people actually swing on it — for me, it was too cold to try to wade through the fast-flowing river. 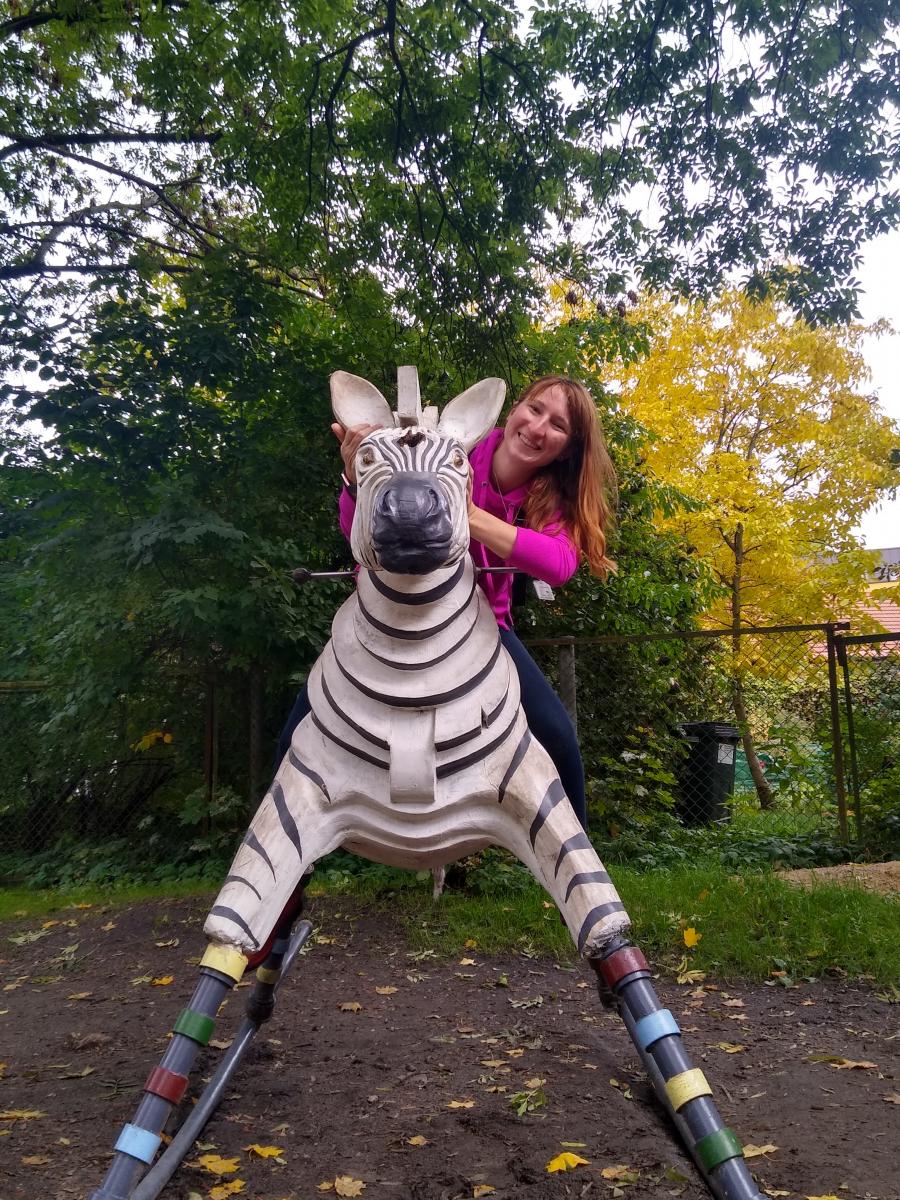 The Republic even has its own “Constitution” with rules that I believe everyone should follow:

“Everyone has the right to make mistakes”

If you need a smile, go and read the whole constitution online, it’s available in real life in many different languages.

Stay tuned for more stories and tips from our Student Ambassadors and get inspired to explore Estonia beyond the main cities!